iHear Band in the News “Tweeple” (Tweet people) gather at the shop to make friends, get updates and show off their musical talent – or find job openings.

Those musically talented can also join the band performing there. But whether they are capable or not is left up to voters on Twitter.

Well over a hundred Tweeple take part in the Sunday evening event at Wawee Coffee Shop in Soi Aree, seven of whom have joined the threemember iHear Band.

It was Patchara Kerdsiri, a 32yearold Web-program developer and iHear Band keyboardist, who came up with the idea for such a gathering. He applied the “open source” concept in which anyone can join and the public decides.

Patchara, or @iPattt on Twitter, is also a user of online social networking services such as Facebook, YouTube and Flickr, and has been blogging for years. He has been twittering more intensively for four months and has almost 1,200 followers on the site.

“Twitter combines the two worlds of reality and online. Famous people in reality are also famous on Twitter. You must be real otherwise people will not pay attention to you,” he says. “Activities both online and offline can enhance the potential to strengthen your brand.”

In this way, individuals can own a brand without having to depend on the costly mainฌstream media for publicity.

Patchara and his close friends had once had a music band. But the group was forced to dissolve after it couldn’t bear the cost of promoting itself through the media. Now iHear Band has become famous on Twitter – and the more people talk about it, the faster it becomes more successful in real life.

The band is also going to perform at the “Twittcm” event at a Wawee Coffee branch in Chiang Mai, and has been hired to perform at other events.

Patchara said Twitter opens the chance for users to be close to famous people. Fugitive former prime minister Thaksin Shinawatra, or @thaksinlive, veteran politician Chaturon Chaisang, or @chaturon, and Patee Sarasin, or @patee122, have replied to his “tweets”.

“In real life, we would never have a chance to talk to these people,” he says.

According to Patchara, Tweeple who joined the event and met their counterparts in person are more eager to get updates on their friends’ online. Meanwhile, other Tweeple who have heard people talking about the gatherings do not want to be “out of trend” by missing the next event.

Tweeple also take part in other activities including “Twittbkk”, which has been held for a third time, and a BarCamp gathering, where every attendant must stand up and speak on any topic he or she fancies. The pictures of the Tweeple gathering at Wawee Coffee published here were acquired through announcements on Twitter.

Click picture thumbnail for viewing, then use arrow key to navigate and ESC back to blog. For file, use right-hand click and choose “Open in new windows” or “View Image”, then “Save”. 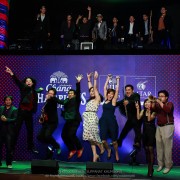